2_7_0:admin:core-update
Translations of this page:

This action, limited to iTop Administrators, allow to upgrade the iTop application code from your web browser, without the need to connect to the iTop server.

Because it uploads the package from the user PC on the server, the web server must allow uploading this size of file. Patch package are much smaller than a full package:

The Application upgrade tool does not add/remove modules/extensions, so it does not install properly a major iTop upgrade. Just run a Setup after to restore the situation, if you did this by mistake. But in general, the web server parameter allowed_max_file_upload_size is not big enough to upload a full iTop package. 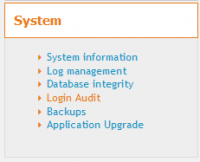 Checks on opening the page:

The user must check disk space left! 200 Mb seems to be a minimum without backups 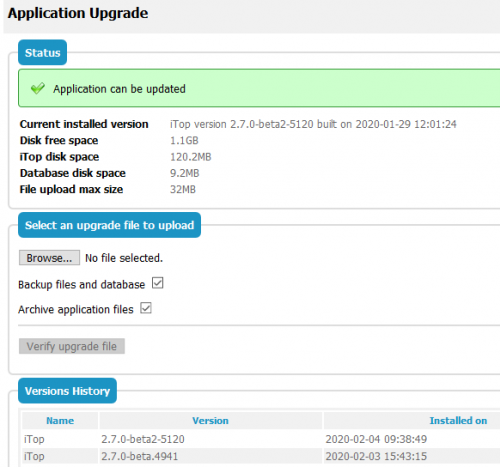 Check after a zip is provided:

Once a zip is provided, it unzips the package in a temporary directory and controls: 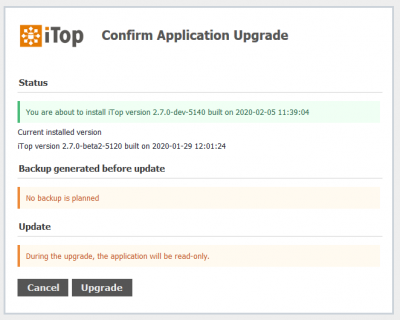 At the beginning of the application upgrade, iTop is moved in read-only, by the means of a file named .readonly under <itop>/data.
Then during the datamodel compilation, iTop is moved to maintenance mode, by the means of a file named .maintenance in the same place.
This mechanism applies on Setup, when iTop Hub pushes an extension, when the ITSM Designer pushes a new datamodel and on an Application upgrade 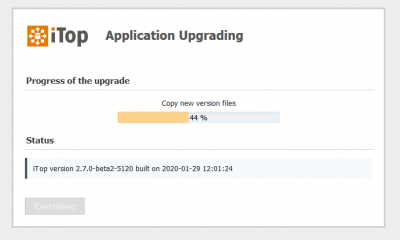 In case of error, run a Setup to repair, in general it is enough, unless you have a datamodel incompatibility 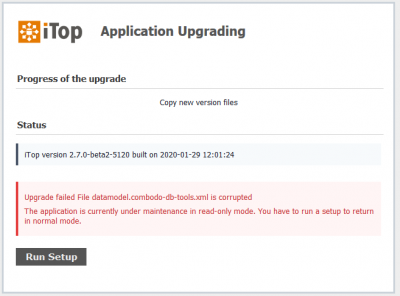 If it's not sufficient, you will have to manually do the installation process, either of the new version or the old version, if you have XML incompatibilities that you have not been able to fix.

Question: My iTop remains in read-only?
Answer: If the upgrade process crashes in the middle, the <itop>/data/.readonly and <itop>/data/.maintenance files might need to be removed manually. A successful Setup remove automatically those files after a failed Application upgrade.