2_7_0:advancedtopics:data_synchronization
Translations of this page:

If you are not familiar with the concept, start by the Overview 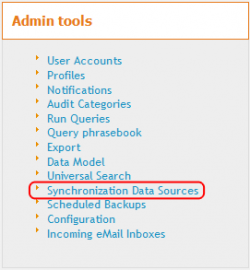 The table which will hold the replicas, is created based on the class datamodel, if the datamodel is changed later this table will be updated by the setup (as usual column will be added but not removed).
Because it was required to be able through synchro_import.php to empty fields such as date, the format of date column was changed in release 2.3.4 from date to varchar(10)

This section of the properties defines

This section defines how the deletion of the synchronized objects are handled:

If your set a Full load interval of 7 days, and a Retention duration of 14 days, an object no more provided by the source will be deleted after 3 weeks. 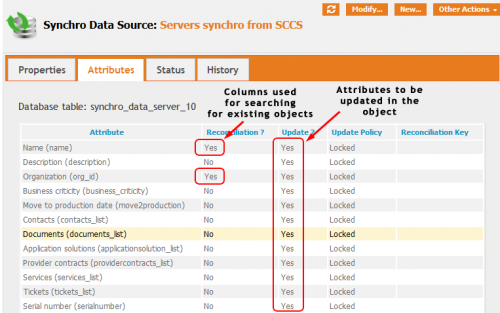 When a new record appears in the synchro_data_xxx table, the synchronization mechanism will try to associate this record with an existing iTop object. If one or more Attribute is marked as “Yes” in the “Reconciliation ?” column, these columns/attributes will be used to search for an iTop object that matches all these values. If one object is found, it will become associated with this record. If no object is found, a new iTop object will be created.

The Update column defines if the attribute must be updated or not.

When updating iTop object, Null and empty string are not equivalent

You must use your own feeding mechanism for loading Null values in synchro_data_xxx table, as synchro_import.php can't do it

Limitations: Some field type cannot be reset by DataSynchro: Enum, Integer and Decimal

The column Update Policy defines the behavior of the updated attribute when editing the iTop object. The possible values are:

Finally, the Reconciliation key column defines how to process attributes which are references to another iTop object (i.e. Foreign keys). The supplied data can contain either the actual value of the foreign key (id) or another attribute such as the name of the object; which must uniquely identify the object.

For foreign keys, iTop does not support the reconciliation on an combination of the multiple attributes (like name AND organization). If such a need arises, then you must use an ETL or a script to perform the desired reconciliation before providing the id to iTop.

Otherwise the tab displays a schema similar to the one below: 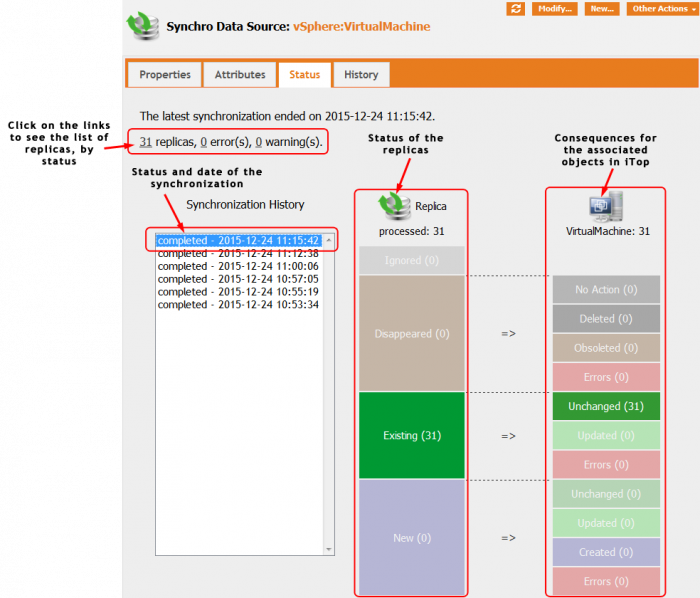 On the left of the screen, each execution of the synchro is displayed in an historical list, showing the overall status, the start date and time of the execution.

Click on an element of this list to show the corresponding status in detail, displayed in the two columns on the right.

The column at the left displays the status for the records in the synchro_data_xxxx table:

The column at the right displays the consequences of the synchro, in terms of modifications on the associated objects in iTop.

In iTop, the Replicas are used to store the status information and the relation between the raw data loaded in the synchro_data_xxx table and the associated iTop object.

The Replicas for a given data synchronization source can be displayed by clicking on the links at the top of the status tab. A Replica is displayed as shown below: 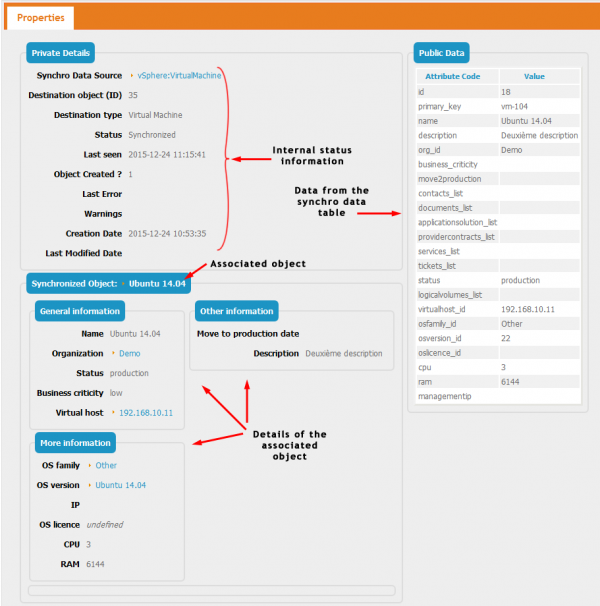 The content of the replicas is useful to understand the behavior of the data synchronization mechanism (and to get more information about the errors), but its data are maintained by the synchronization and should never be modified manually.

If you populate the table synchro_data_xxx using SQL commands (either with an ETL or a home made script), you must take care of never creating duplicate records. Remember that each record in the synchro_data_xxx table corresponds to exactly one object in iTop.

In order to avoid such duplicates, you must first query for an existing record before inserting a new record into the table. To speedup this query you can either construct a value that uniquely identifies the “source” object and store this value in the “primary_key” column of the table (which has a unique index), or use any combination of the record's column and alter the definition of the synchro_data_xxxx table to add your own indexes.

Then trigger the execution of the data synchronization between the iTop objects and the replicas of the temporary table by executing the page “synchro/synchro_exec.php” either in command line mode, or by invocating the web page (using wget for example).

How to specify a list of related objects (link set)

You can synchronize those lists by writing all the information in the corresponding column:

Here is an example specifying that the login will have one profile: 'Portal User'

More information in Import a LinkedSet